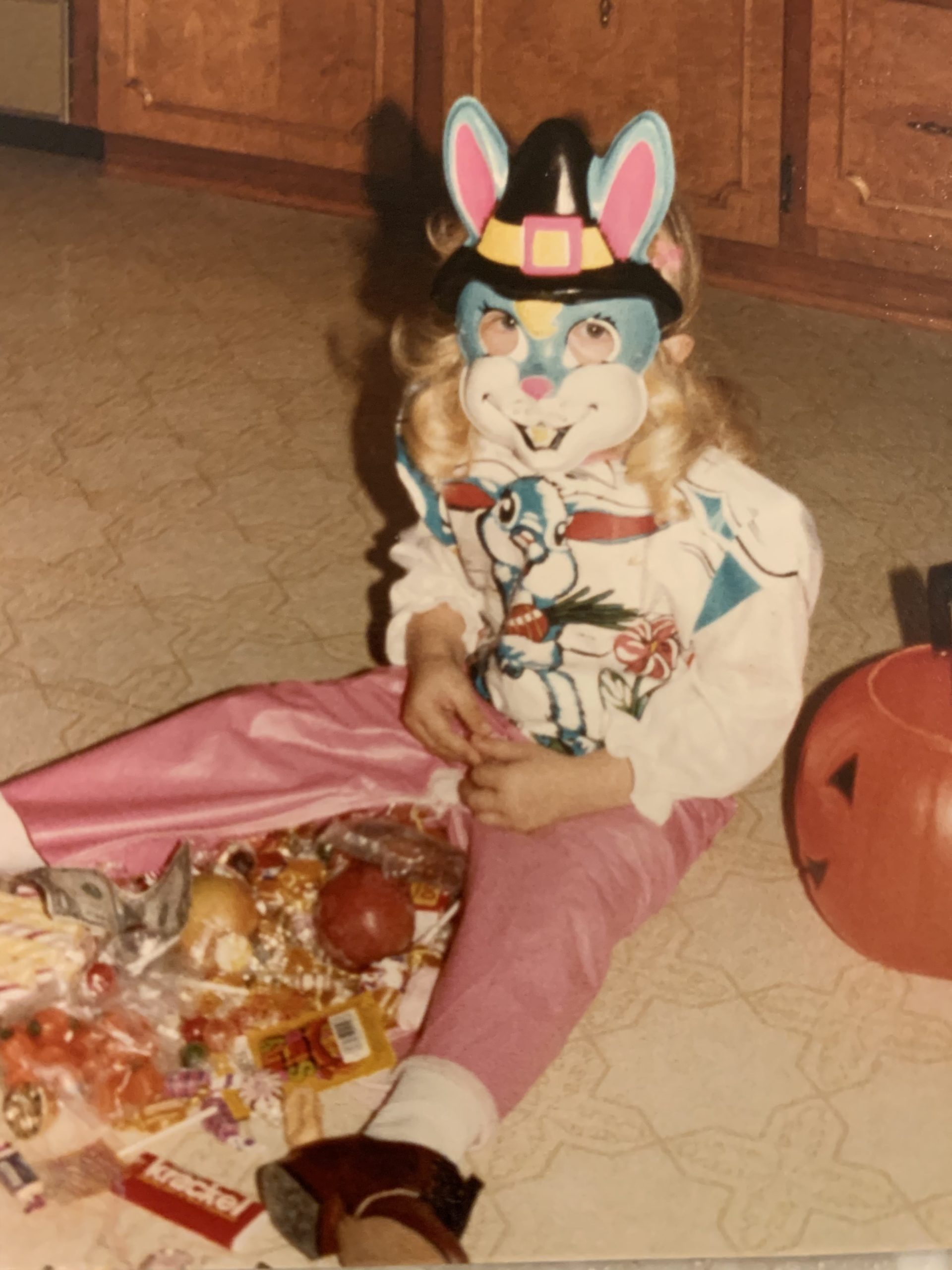 I fondly remember myself as a carefree little munchkin growing up in the early 80’s and late 70’s. The crisp, cool evenings when lightning bugs started to sleep signaled the coming of Autumn.  Admittedly, I was oblivious to the Fall colors of the trees that my mom enjoyed.  It mattered little that my dad was happy to get less overheated from a Saturday of yard work.  Leaves made a mess.  Nights fell earlier.  Football season seemed to make our little community buzz with excitement.  Yet, all I recall caring about was one simple night filled with just the right amount of spookiness, freedom and sugar-filled delight – Halloween!  Every year I waited with anticipation for Halloween to arrive.

Halloween in rural, small town America growing up in the early 80’s was a simple and family-friendly event.  I remember on October 30 when I would sit in the back yard with my dad and carve the most basic of pumpkins.  It had triangle eyes and a triangle nose with crooked teeth.  Mr. Pumpkin was the grandest I could imagine.  Dad and I would place a candle inside and watch it’s glow.  We would cross our fingers, knowing that Mr. Pumpkin would most likely be a squirrel’s dinner before he ever saw Halloween night.  So many things seem different now.  Halloween in the 2000’s has gone wild!  But I will always remember the simpler days.  The innocent fun that came from a treat-filled holiday still leaves me in awe BECAUSE it was not Pinterest perfect or Instagrammable .

A pumpkin and maybe a scarecrow was the only decor we knew, and gone are the days of the traditional jack-o-lantern.  With decorating stencils and special carving tools, now a kid can create the entire Disney character showcase on a pumpkin.  And these orange works of art aren’t limited to just outrageous carving.  Many homes completely transform pumpkins with paint and glitter to compliment the haunted house theme oozing from their roofs and windows.  Thank you Pinterest for giving us even more expectations.  I suppose this is me getting old and longing for the good ol’ days.

In rural America we went trick-or-treating as little kids in cars with our parents.  Mom and Dad drove me to my aunt’s house, then my grandparent’s, then their best friend’s home and the pastor’s house for candy. I would receive huge pre-made bags of treats with my name on them.  Yes, I was expected to stop by to show off my costume and my parents knew it.  Four stops and two hours in and it was bedtime.  Still, the haul was enormous for a three year old.  As I got older, my parents would let me go trick-or-treating in town with my friends.  There was no ongoing parental debate or vote over the exact age you and your group of friends would get to go trick-or-treating alone.  It just happened. We were only instructed to make it back home before the older kids started TP-ing or egging the houses!

Class Halloween parties were non-existent.  There was no pressure to wear the perfect costume in the classroom and no ultimate plan for a grand, classroom Halloween bash (also Pinterest inspired.)  We colored a pumpkin or a scarecrow with our Crayolas and called it a day.  Happy Halloween!

My favorite candy bag as I got older was the pillow case.  It was the ultimate and I have seen nothing else created and marketed to little spooks that trumps it’s capacity.  There certainly were not personalized, Halloween-inspired, or costume matching candy tote bags.  Once you graduated from the plastic pumpkin, just yank your case off your bed pillow and head out the door.

What was that?  Halloween was mostly an out-of-school celebration.  The day was not documented with pictures, school costume parades and social media updates of all of the festive details. Even I didn’t know how adorable I looked in my Strawberry Shortcake costume until weeks later when my mom took the rolls of film to be developed at the local dime store or Walmart.

Speaking of Strawberry Shortcake…if you grew up in the early 80’s, there were two options when it came to Halloween costumes.  You either got the homemade version that saved money or the expensive, plastic version from Wal-Mart.  The homemade versions were guaranteed to be cheap and original.  Wal-Mart promised the most popular Care Bear, Rainbow Brite or Masters of the Universe superhero along with lots of sweat.  With a full-on plastic mask held on by a thin elastic band and a head-to-toe plastic body that could easily tie on top of any outfit underneath, we were enamoured.  Also, I keep saying Wal-Mart.  This was the only place to shop for “cool stuff” in my hometown.  I could have never imagined the excessiveness of today’s Halloween pop-up shops.

Remember when Tylenol tampering led to the safety seals we now see on medications?  That happened when we were kids.  Parents back then were rightfully focused on making sure that treats were free of poison and drugs and razor blades.  My mom had to inspect every single piece of my Halloween loot before I was allowed to savor even one little, sugary piece. Parents today are mostly worried about the sugar content or whether the candy is organic or not.

No doubt we should have been smarter and kinder and much more aware, but do you remember when political correctness wasn’t a thing?  As a kid we simply never considered that a Halloween costume could be anything other than cute or scary.  I’m so glad my kids are more aware than I was at their age.  Please, no Native Americans, Hispanics, Geisha girls or other offensive looks for 2020 trick-or-treaters!  Stick with Paw Patrol, Spiderman or the 1980’s American Girl Doll.  Yes!  Can you believe it?  There is now officially a 1980’s American Girl!  I am speechless.

One last thing about Halloween if you grew up in the early 80’s…in so many ways I am simply left shaking my head and asking, “what were we thinking?”  The answer?  I’m not so sure we were.  My most vivid Halloween memory was a slumber party given by my Sunday School teacher.  I was probably in 4th grade. They lived on a farm.  Myself and 10 other girls had a Halloween sleepover under the stars.  Prior to bedtime, my SUNDAY SCHOOL TEACHER rented us two VHS videos from the local video store – An American Werewolf in London and Old Yeller.  I’ll simply leave the story right there and let you use your own imagination as to how that one turned out.

Amy Colón is a freelance, content contributor and copywriter with over 20 years of experience in writing and education.  She is passionate about international travel and encouraging women to leap beyond their comfort zones to intentionally explore the world.