I Flew During the Pandemic. Next Time I’m Driving! 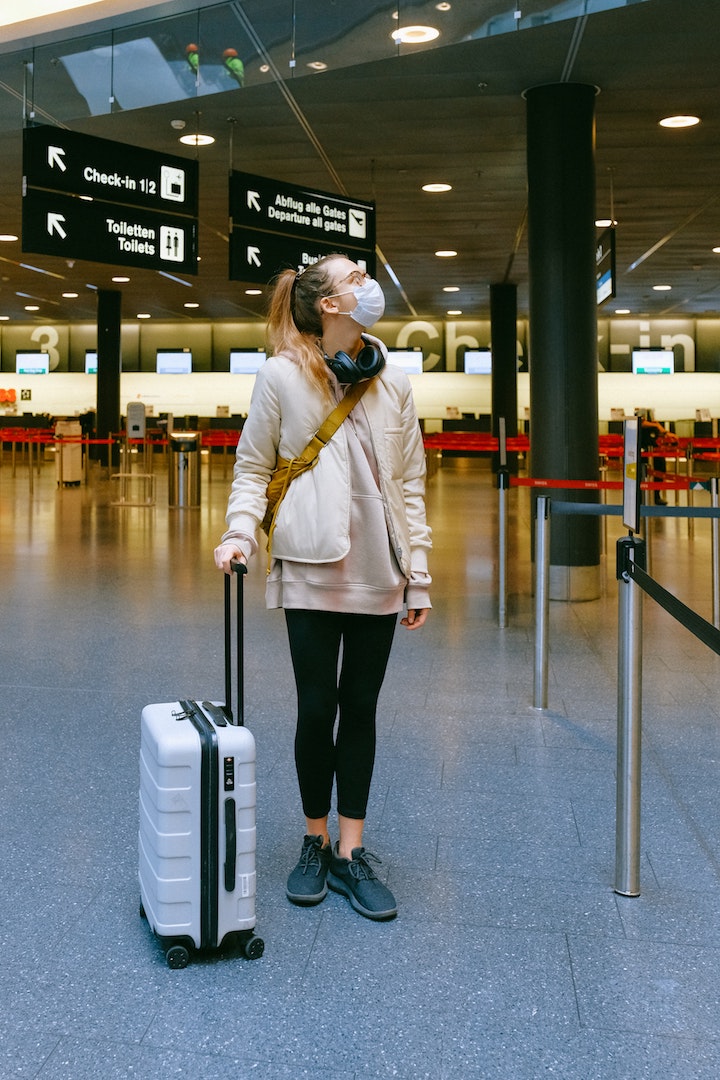 On May 8, 2020, I flew from Portland to LA amid the Coronavirus pandemic.

Have you braved air travel since Coronavirus began? With 75% of global travel halted since March, to have flown in this time almost feels like being a member of a strangely elite club. Women who have braved the unknown and survived to tell about it! HA! That’s me.

Seriously, though, prior to arriving at PDX airport, I had seen all the same news reports as you and I was uncomfortable. As Coronavirus realities hit worldwide in mid-March, images flooded my news feed. It was bad. It still is. I watched Americans all over the world scramble to quickly get home as countries started closing down. Airports were chaotic and jam-packed with people. Then later, I observed a mix of photos and news reports with conflicting reports on global travel. Some showed empty airplanes and desolate airports. Others claimed the discontent of packed flights due to airlines cancelling and consolidating their remainder of flights to maintain passenger loads. I honestly didn’t know what to expect, but I decided to continue with my scheduled trip. Here’s how it actually went..

Why I had to fly

I travel a lot for work and leisure. Ok… let me rephrase. I used to travel a lot for work and leisure until I was grounded by Coronavirus. Early on, like so many others, work trips were cancelled and, sadly, even a prepaid retreat to Bali. But this one work trip to Oakland still really needed to happen. Both internationally and stateside, I know my way around an airport – global travel is something I know well. The flight from Portland (PDX) to San Francisco (SFO) was going to be short. How terrible could it be, right? Although I thought about pulling a Naomi Campbell, I stayed short out of getting a Hazmat suit for the journey. But armed with a box of face masks, hand sanitizer sprays, wipes, and gloves, I decided to go for it.

Getting to the airport

Typically, I take an Uber to and from the airport. It’s easy and ends up being cheaper than leaving my car in airport parking for the average 3 day work trip. This time, however, it seemed smarter to drive myself and mitigate the chances of close proximity to as many people as possible.

In the rare times I have driven myself to the airport, I typically park in the long term parking lot for $24/day. To my surprise, this time I noticed that the economy lot did not look full at all.

I decided to chance it. Score! There were plenty of spaces AND it was half price!. At this point I was more than 2 hours early for my flight, and for PDX, this is very early. My shuttle for the airport arrived less than 5 minutes after I parked. There was no one else onboard and the driver was wearing a mask. Top that off with a drive to the terminal that only took 10 minutes and this trip was getting off to a very good start.

I had already checked in online and with just a carryon in hand, I headed straight into the TSA entry line. It was eerily quiet as I walked the halls towards security. Having TSA precheck, usually you get your own lines. There was still a pre-check line, but only one security line TSA station for everyone. I suppose this was in an effort to control the crowds that didn’t actually exist. Luckily most people were wearing masks and social distancing and I didn’t feel too closed in.

Overall, everyone just seemed a little dazed and confused as to the right etiquette to follow. We all just kept to ourselves and generally moved forward with caution. As for masks, they had become recommended, but not yet mandatory, so there was confusion. But the airport seemed to be doing their best to provide as much safety and order as possible. The Portland airport (PDX) was actually a somewhat gentle entry into Coronavirus air travel.

After security, it was time to eat. It took a minute to figure out where to stand and how to maneuver the new, safer ways of paying. Still, there was plenty of time to enjoy breakfast from a local restaurant. The line was so fast! I felt generally safe in the waiting area, as people were spaced out. And yes, I was that crazy lady wiping down everything that I came in contact with Clorox wipes. The peace of mind that it gave me was worth all the funny looks.

I don’t know how other airlines at PDX were managing their customers and flights, but Alaska Airlines was clearly trying to do their best. I have to admit, by now I was ready to just get on the plane and settle into my safe little seat for the duration of my flight. Thankfully, when I finally boarded, I was able to let out a huge sigh of relief. Even though this airplane was 2X2 seating, I found myself seated alone without any passengers nearby. This was a big plus and served to calm my nerves a bit more.

The flight attendants were nice and courteous and Alaska still served their beverage and snack service. As of May 8, the mask ordinance had not yet taken effect. Still, the majority of people on board wore them.  Overall, I feel like I was delivered to San Francisco with a fair amount of safety from the virus.

Landing in San Francisco, there were a bit more people than PDX. Since I only had carry on, I was able to go straight to the shuttle and then take a direct train to Oakland. Again, I didn’t want to get an Uber and sit so close to someone in their car. Both the shuttle and train were fairly empty on a Sunday.

I stayed in two different hotels: the Hilton Oakland Downtown (2 nights) and the Hampton Inn Airport (1 night). Two nights were scheduled and a third night was added because my United flights kept getting cancelled. So many hotels were starting to shut down all over the country, but for now, the Hilton remained open.

Hilton Downtown Oakland: This hotel proved to have more stringent security. They had plexiglass separators at the desk and a guard at the door who required a room key before entry into the hotel. The downside was that the room was not sanitized as I would have hoped. It’s a very good thing that I came prepared with all of my personal cleaning supplies!

Hampton Inn Airport: This experience was not the greatest. Some of their new guidelines stated that they were no longer providing shuttle service or breakfast. I only discovered this AFTER checking in, so I was forced to Uber after all. I was also given a sad little breakfast to-go bag each morning. The plus side was that overall, people seemed to be making a decent attempt at wearing masks in common spaces and their security measures seemed well thought out.

On Day 4, I was once again airport bound. SFO was a lot more busier. TSA stations in San Francisco were separate for TSA Pre-Check and Non-TSA Pre-Check, but the lines were mixed in as well. I was given a plastified paper that said I was TSA Pre-Checked and that I would need to hand it to the TSA officer at security. People seemed more anxious as everyone was ushered through security with very little social distancing or order.

The line at the only open café was long this time. Still, it was orderly and social distanced. Everyone moved smoothly, although the wait after I placed the order was over 20 minutes long.

Wishful that I would experience generally the same flight home as I had on Alaska Airlines, my hopes were soon dashed. There were so many more people waiting for my United flight. This time, my 2×2 seating arrangement was going to be a crowded one.

It did turn out that no one was seated beside me once again. Sadly, there were people in the seats directly in front and behind, making 6 foot distancing impossible. It was such a different flight than the one before. Despite the now current mask mandate, many people were taking their masks off and even walking freely unmasked throughout the cabin. There was no service on the flight and the attendants seemed to be less under control of the passengers. This became most obvious when we landed.

As I said, there was already no way to observe 6 foot distancing. Add that to the herd effect that happened as soon as our plane landed. Passengers scrambled like always for their overhead luggage with few masks and no distancing. A person behind me sneezed and it almost led to my undoing as I jumped sky high. What a cartoon moment! But really, there was nothing funny about it. I was ready to get myself home.

Overall Impression of Traveling During Coronavirus

Flying during the Coronavirus pandemic was mostly not horrible. If you feel you must do it, you absolutely can. But if you have the option of keeping your feet on the ground, I highly suggest choosing that instead. Looking back, I wish I had chosen that 10 hour drive from Portland to Oakland versus the added stress and potential risk to my health that I experienced in airports and on flights.

Here are a few tips if you do plan to brave air travel during this pandemic: