Why the Heck Did We Jump Out of a Plane? 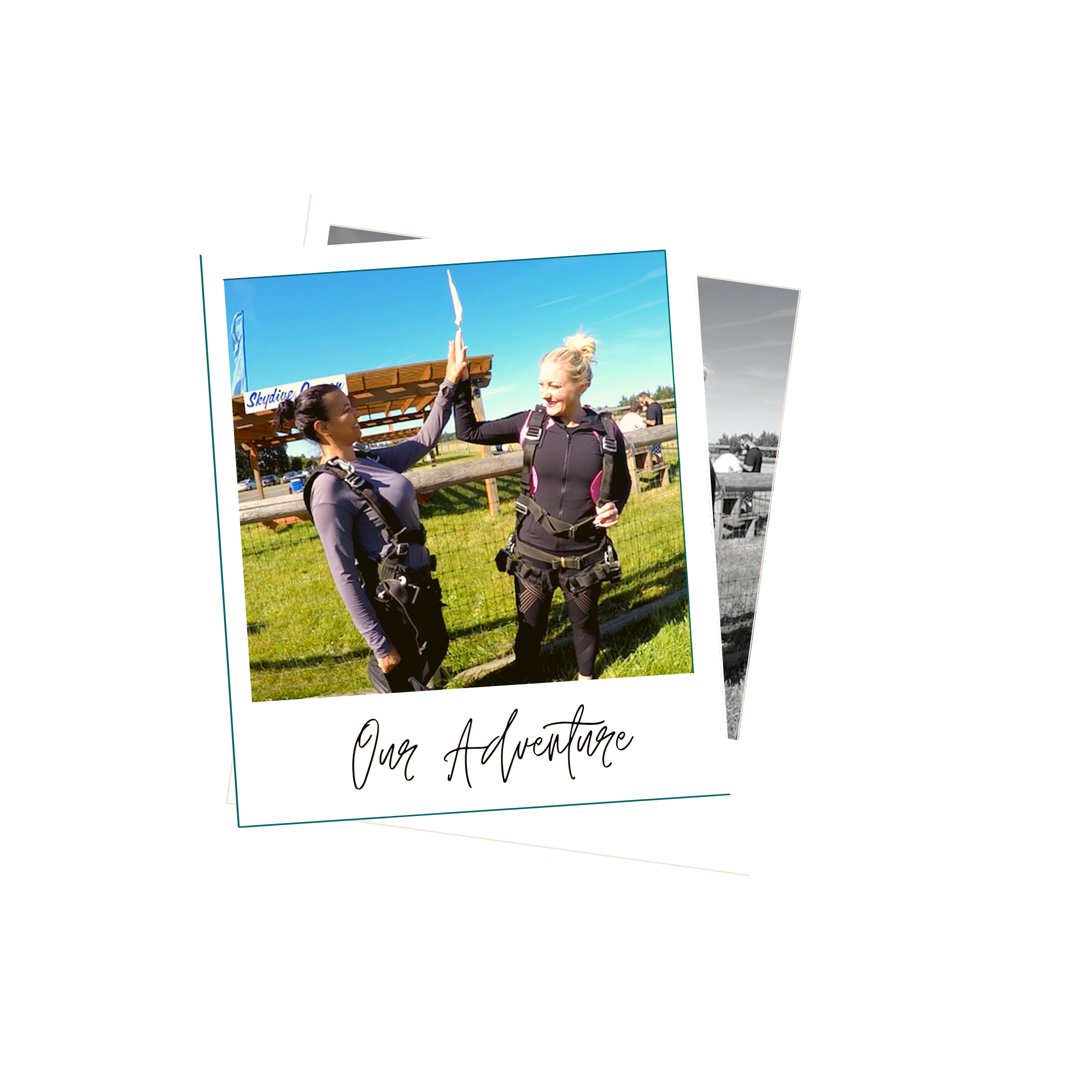 Before we went skydiving, we were teetering the line between co-workers and friends.

We had a few things in common; we were both single, childfree, and spiritual Gen X women who lived in New Jersey for years.  And although we were successful in our respective careers, we both felt trapped in a corporate environment that was draining our souls. Our skydiving adventure cemented a change in our relationship:  from co-workers to friends and now business partners who officially launched our collaborative adventure: iGenxWoman.com exactly one year later.

Just a few months before I went skydiving, I was in the camp of “Who in their right mind would do this?!!”

But over the three years preceding my skydive, I was in the preparation stages of what would be the biggest DARE in my life.  These were years of doubt, one step forward and two steps back, and reasoning my way out of going for it.  I was certain that my professional life as I knew it had run its course.  I had to leave the career that I built over two decades and the comfort and security of a corporate paycheck behind to follow my life’s purpose:  Becoming an entrepreneur and serving others to reach their highest expression through their life’s work.  But I was too scared to take the leap.

Conquering fear is a practice and I needed to start my training and build those muscles!  I began with simpler things to get me out of my comfort zone from eating foods I wouldn’t have tried to having conversations that involve “feelings” with my parents (that was a big one!).  Then I upped the stakes and moved across country from New Jersey to Oregon via Ohio.  And the last step was doing something so out of character and that scared the heck out of me: SKYDIVING.  Swimming with sharks was the other option.

Skydiving made “sense” as the last step before leaving everything that I knew behind and threading a new path.  It touched on three primal fears:  fear of the unknown (I had no idea what to expect – this could turn out amazing or a terrible idea), fear of surrender (trusting your life in the hands of a total stranger was a scary proposition), and fear of death (there was a chance that plane might fall or that parachute might not open).   And if I can jump out of a plane and trust that I will be ok, even though I have never done it before, then I can do anything!  At least that was my logic at the time.

Other than checking whether SkyDive Oregon had “lost” anyone”, I decided not to research the mechanics of skydiving or listen to other’s experiences…  I was afraid that if I did so, I would not go through with it.  So, the reservation was made… here we go!

We arrived in Molalla around noon.  It was a beautiful day and colorful parachutes were already sprinkled in the blue sky.  It took a few hours, some of them anxiety ridden I admit, before it was our turn. We had a short training, then went to meet our instructors and get suited up!  One last stop at the loo and off we went!   I asked my instructor that we jump first and I specifically told him to push me off the plane if I resisted.  I had this vision that the only way I was going to go out was kicking and screaming.

As the plane was taking off, a wave of adrenaline induced excitement mixed with anxiety and fear washed over me.   My instructor was snapping pictures and showing me the view but my mind was racing.   Why on earth did you do this to yourself? Why couldn’t you just hand in your resignation?  And Why was this insanity necessary?  So many Whys careened through my mind.  And then it was time!   We were at 13,000 feet.  The plane door opened.  A wave of cold air touched my face.  This was it…  this was a truth or dare moment.  And I chose dare. There was no going back!

“Are you ready?” My instructor asked.  My answer was “No but let’s do this!”.  And we did.    He didn’t have to push me. I just jumped with eyes wide open.  The freefall was surreal.  The wind was so cold and so strong. And I felt the beginnings of a panic attack rise up when it suddenly stopped in its tracks.  My mind literally shut down.  There were no thoughts.  Only cold wind, my instructors’ voice, and adrenaline pumping throughout my body.  I have never felt so alive!  So, I just surrendered to the feeling of letting go of control and trusting that all is well.  I was in the present moment and everything looked brighter, crisper.  A few short moments later, the parachute opened and a serene calm took over.  We were floating in the clouds, I felt the warmth of the sun, and took in the amazing sights.

And shortly thereafter we landed on our feet!  (and no underwear change required!!)  My worst-case scenarios did not materialize and instead I had one of the greatest experiences of my life.

That night, I slept like I have never slept before and the next day I felt like someone took a hammer to every bone in my body.  “Adrenaline withdrawal” someone told me.   And the following day, I handed in my resignation.

Fast forward to today, I am still grateful that I decided to “jump” out of the literal and figurative planes; leaving behind the security of the known and stepping beyond my comfort zone, into the void. I am now living an amazing adventure, one where my life’s work is fully in alignment with my life’s purpose!

“Are you crazy??!!”  That’s the response I received from a couple of my friends when they found out I went skydiving.  Hmm, not exactly what I was expecting.  Where were my high fives for being a daredevil and jumping out of a plane at 41 years old??

Skydiving is something I’ve been wanting to try for years so it had been on my bucket list.  Since I was young, I’ve loved the thrill of a good roller coaster. That feeling when your stomach drops and you scream your brains out, and then the euphoric state that washes over you as the ride comes to an end.  Yeah, that was me.  I like trying new things and am mostly a ‘yes’ person so when Dena mentioned it to me, I was all in.  I finally found someone that would try it with me.  Yay!

I didn’t think too much of it leading up to it.  The night before we did some googling of what to do to prep.  I was mostly concerned about hydration and food, hoping to avoid anything exiting my body during the jump with the exception of screaming at the top of my lungs.  Something I fully anticipated would happen.  Seemed pretty straightforward as far as not eating a big meal beforehand and making sure to have a small snack an hour or so before.  And bring snacks and water with you for afterwards.  Ok, that’s easy.

My instructor was super cool so I felt like I was in good hands.  He shared his story of his initial fear of flying so he tried skydiving one day and fell in love with it.  He conquered his fear and knew it was his calling to help others do the same.  I love a good story like this.

I started to get a little shaky as we were getting on the plane. So I did some breathing exercises and thought about all the things I was grateful for.  And then I got emotional thinking about everything but was also excited for the release that I was expecting to come after the jump.   There was a group in front of us doing a tandem jump together.  Wow, now that seemed crazy.  Dena wanted to go first so she wouldn’t chicken out.  Let me tell you, there was no time to make decisions about jumping.

I screamed for the full 90 seconds of free fall.  The wind whipped in my face but wow, this was pretty amazing!  The best part was parachuting down and looking at the stunning Oregon scenery.  It had turned out to be a beautiful, sunny day and the mountains were gorgeous.  This isn’t a view you get to see very often.  I felt like a bird soaring in the skies, except (thankfully!) there was an instructor strapped to my back ensuring I wouldn’t die.

After I made a smooth landing, I realized I was jittery and started feeling a bit sick to my stomach from all the adrenaline that was pumping.  Nothing a handful of almonds and some water couldn’t remedy.

As fast as it went, I was excited and proud that I had done it!  It was definitely a thrill that I won’t forget.  I will say the daredevil in me was a bit more hesitant, which has changed with age, but it was well worth the wait.  Things have a magical way of showing up when the time is right.  Knowing that I put myself out there and experienced something new (and survived it!) confirmed that I can do anything I put my mind too.  And here I am a year later having co-founded GenXWoman, the biggest decision I’ve made for myself, for my life, for my joy, for my happiness, for my purpose, and for all the women out there like me.

“Ask what makes you come alive, and go do it.  Because what the world needs is people who have come alive.”